Container marine market: ports on the verge of collapse _ Sep. 2021

Global container marine market saw continuously surging freight in 2021. According to related data, the freight rate of one standard container exceeded US$20,000 from China/Southeast Asia to the East Coast of North America, which was $16,000 on Aug 2. The cost of one 40ft container from Asia to Europe was near $20,000, which was 10 times of that one year ago. Peak-season demand for the Christmas and the congestion of ports were major reasons for recording high sea freight. In addition, some shipping companies took insurance fee to ensure the delivery within several weeks and importers were bidding up price to scratch containers, which also affected price.

According to the data from Shanghai Shipping Exchange, the Shanghai containerized freight index was at 4568.16 on Sep 10.

The COVID-19 pandemic continued spreading across the Europe and consumers’ demand for various materials was high. Transportation demand was stable on the market. The ports were still seriously congested in Europe.

On Sep 10, the freight rate from Shanghai to basic ports in Europe was at $7,491/TEU. The average utilization rate of seats at Shanghai port was around 100%.

Impacted by intensified spread of the Delta Variant, the daily new infections remained above 100,000 in US. Demand for various materials like pandemic prevention ones sustained high. The stagnated of containers, unsmooth transportation and the congestion at ports did not change. The sea freight kept high.

In addition, in Europe and the United States, a shortage of truck drivers means that once containers arrive at destinations, it will become more difficult. The COVID-19 pandemic led to the closure of the port, further aggravating traffic jams. The shortage of truck drivers in the UK was particularly acute, in part because EU workers left the UK after Brexit and due to the pandemic. Coupled with tax changes, drivers coming from other regions of Europe faced higher working cost or employment cost for working in the UK.

According to the latest data from the signal of the Port of Los Angeles on Sep 14, the number of container ships waiting for berths at the Southern California Anchorage reached 22, the number of ships waiting outside the port was at 16, and the number of ships waiting approached 38. The average waiting time has increased to 8.5 days from 8.1 days a week ago, with the longest waiting time up to 16 days. Such "congestion" has led to a shortage of goods, logistics delays and rising prices in many places. Increasing freight volume each time and the resulting extension of stay at ports finally led to the backlog of container ships waiting for free berths. The import volumes on the week 39 tends to continue increasing. It means the congestion may be hard to ease temporarily. 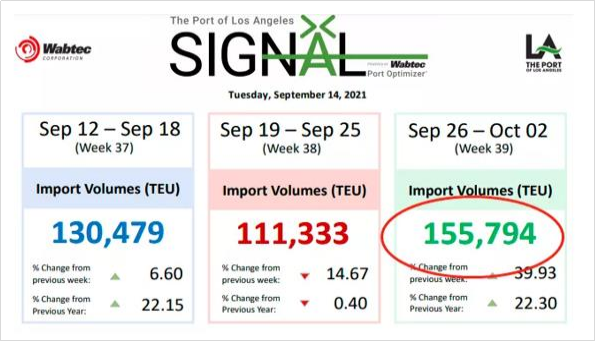 Recently, some large companies even decided to purchase their own container and charter independently to cope with shortage, including Walmart and the Home Depot from US and IKEA from Sweden. An Ikea spokesman confirmed that the company had bought more containers and chartered ships to address product shortages. "We have also transported goods from China to Europe by train and have invested in temporary turnover warehouses in China, Vietnam, India, Indonesia and Thailand to support production," she said.

Looking at the shipping companies, they are expected to achieve record high profit in 2021 and the performance of 9 big shipping enterprises in the first half of 2021 was as following: 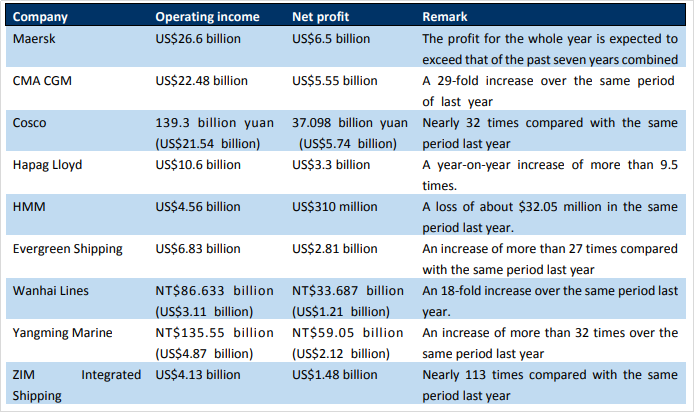 However, shipping companies also faced some problems. CMA CGM made the decision to stop all spot rate increases from Sep 9. Hapag-Lloyd from Europe joined CMA CGM in freezing spot rates and it thought the container market may calm down from its recent frenzy of price rises. Maersk preferred to sign long-term contract with customers. Meanwhile, the ONE from Japan said it would maintain its pricing policy.

Current pressure has caused dilemma on the market. For example, some empty boxes were seriously congested at some ports, while container was very short in some other ports. The spread of pandemic continued and there were some extreme weather like typhoon, further exerting negative effect on the market.